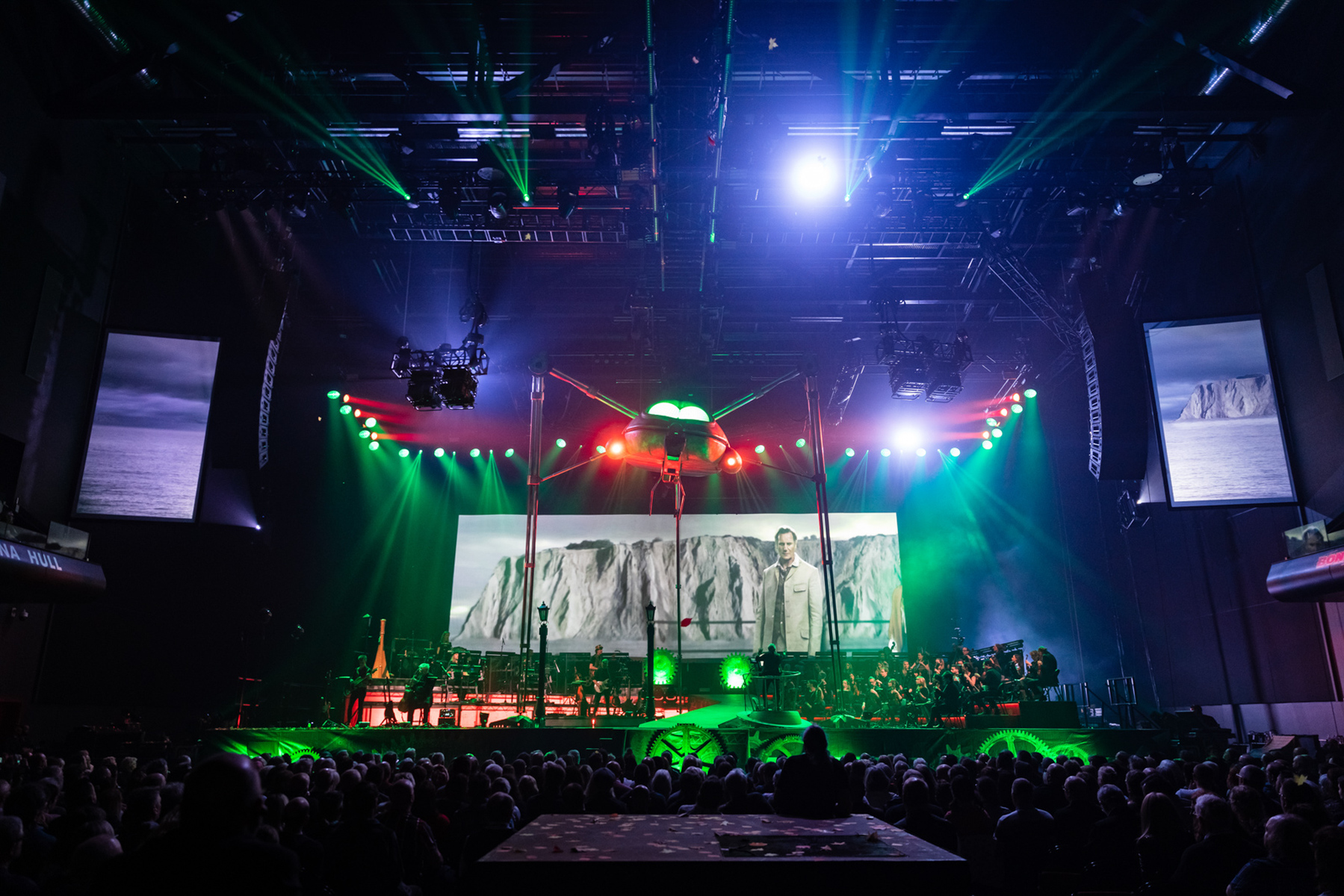 The giant, and constantly evolving production of Jeff Wayne’s Musical Version of The War of The Worlds—which has been touring arenas for 16 years— has been revitalised, with a new cast, additional music and an immersive experience for audiences.

A regular feature over the past 12 years has been sound designer and consultant, Simon Honywill, in the FOH mixing position, and a Martin Audio PA delivering the extraordinary complexity of sound, while RG Jones Sound Engineering have again provided the inventory of sound equipment. Honywill is now on his sixth tour of duty, and in keeping with the production, he has kept the sound suitably refreshed as technology has evolved. His adoption of Martin Audio’s award-winning MLA back in 2012, with its multi-cellular control, took arena sound to another level, ensuring that audiences in the front stalls were subject to exactly the same sonic experience—the full explosion of music, spoken word and special effects—as their more distant neighbours at the rear of the upper circle.

This time around, for a production dubbed ‘The Life Begins Again’ tour, Honywill says despite his extensive experience of the production and the venues it visits, the challenges remain the same. “It never gets any easier,” he admits. “The schedule is pretty gruelling, but as time has gone on, we are now very confident about using Martin Audio’s DISPLAY2 shells from previous shows to speed up the process of system optimisation and array deployment.”

Fired by the success of the 2018 tour, when he proclaimed that he would never do this tour with any PA other than MLA, he remained true to his word.

“Ten years and more down the line with this system, I am still entirely convinced that it is way ahead of the competition,” he says. “Yes, there are systems that might rig more easily and might have the advantage in other areas, but we are here to deliver the iconic sound of this immense production to every seat in the house, nothing more, nothing less. There is no other system I would even consider to achieve this.

“MLA’s unique, innate technology delivers gob-smacking evenness, incredible detail, a sense of real power without ever sounding overly loud, no listener fatigue and the amazing ability to create Hard Avoid areas.For Jeff Wayne’s Musical Version of the War of the Worlds, the one thing that everybody waits expectantly to hear is the opening nine bars of epic string orchestration, loud and proud.MLA allows me unprecedented amounts of acoustic gain from the 36 strings—and the wave of excitement that races through the audience when they play those opening chords is palpable.”

And so he adopted the system design that had worked so well last time, with up to 20 MLA per side as main left/right hangs, a maximum 16 MLA Compact on each wing as side hangs, and once again, flown left/right infills of eight MLA Mini to assist with vocal clarity near the stage. Explaining this last deployment, he says, “The main hangs are well upstage of the downstage edge, so to give us more control over the headset vocal mics we use on the singers, the MLA Mini are deployed as flown stereo infills with a high-pass filter put in at around 250Hz.Additional coverage close to the stage is achieved with four pairs of MLA Mini front fills, spaced across the stage and hidden behind acoustically transparent panels in the stage dressing.”

The main difference with the rig this time around is the sub bass arrangement. “System engineers Steve Carr and Rylan Machin and I looked at alternatives to previous tours, where a compromised broadside array was placed under the stage about 4m upstage from the downstage edge. There is a great deal of stage machinery for lifts and hologram screens under the stage, along with walking routes for artists and techs—and so space is limited.

“The original idea was to fly the MLX subs, but weight was an issue in many venues.We had to find a way to get maximum even coverage whilst taking up the least amount of real estate and maintaining the integrity of the array. Rylan came up with the idea of using a combination of broadside and end-fire arrangements, which has worked out better than we could have hoped.”

There was only one new arena on the circuit—and this was the relatively new Bonus Arena in Hull, where the system was set up without a pre-existing room profile in D2. “It’s basically a very large theatre in classic shoebox style, but the team excelled in getting the system ready in time for accurate tuning and timing, despite restricted space to fly the system in” he says.

By the team, he means Carr, Machin and Nathan Kennedy. “The standard of professionalism from the crew has been absolutely world-class—they have been exemplary.Nathan’s daily job of finding and rigging suitable points for the surround effects speakers (up to eight WPS per side) has been extremely difficult in some arenas, but we’ve ended up with as good a result as we could every time.”

Other members of the audio team include the legendary Becky Pell on monitors. “She has the hardest job on the gig for sure,” believes Simon Honywill. “I could imagine nobody better to deal with such a demanding gig. Becky’s innate calmness and dedication to her job has ensured that the eight Black Smoke band members, five guest artists, 36-piece orchestra and Mr Wayne himself have all heard everything they need to hear, exactly when they needed to hear it.”

He also credits RF specialist Ricky Spiers. “COVID has been busy getting at us all, and Rick has had to deal with radio mics and in-ears for the artists daily, some of whom are understandably COVID-paranoid.”

RG Jones has been supplying The War of the Worlds since 2009, and this outing also saw the return of Production Director Steve Nolan, Production Manager Andy Proudfoot and many other regular faces that have been involved from the start.

As for the man in the mixing seat, Simon Honywill says, humbly and simply, “My job is about creating great sound,” adding poignantly…” Yes, I could use another PA system from another rental company, but I stake my reputation on it never sounding as awesome as this show does with Martin Audio MLA from RG’s.This system enables you to achieve things that no other system offers, and the team from RG’s know exactly how to get the best from it.