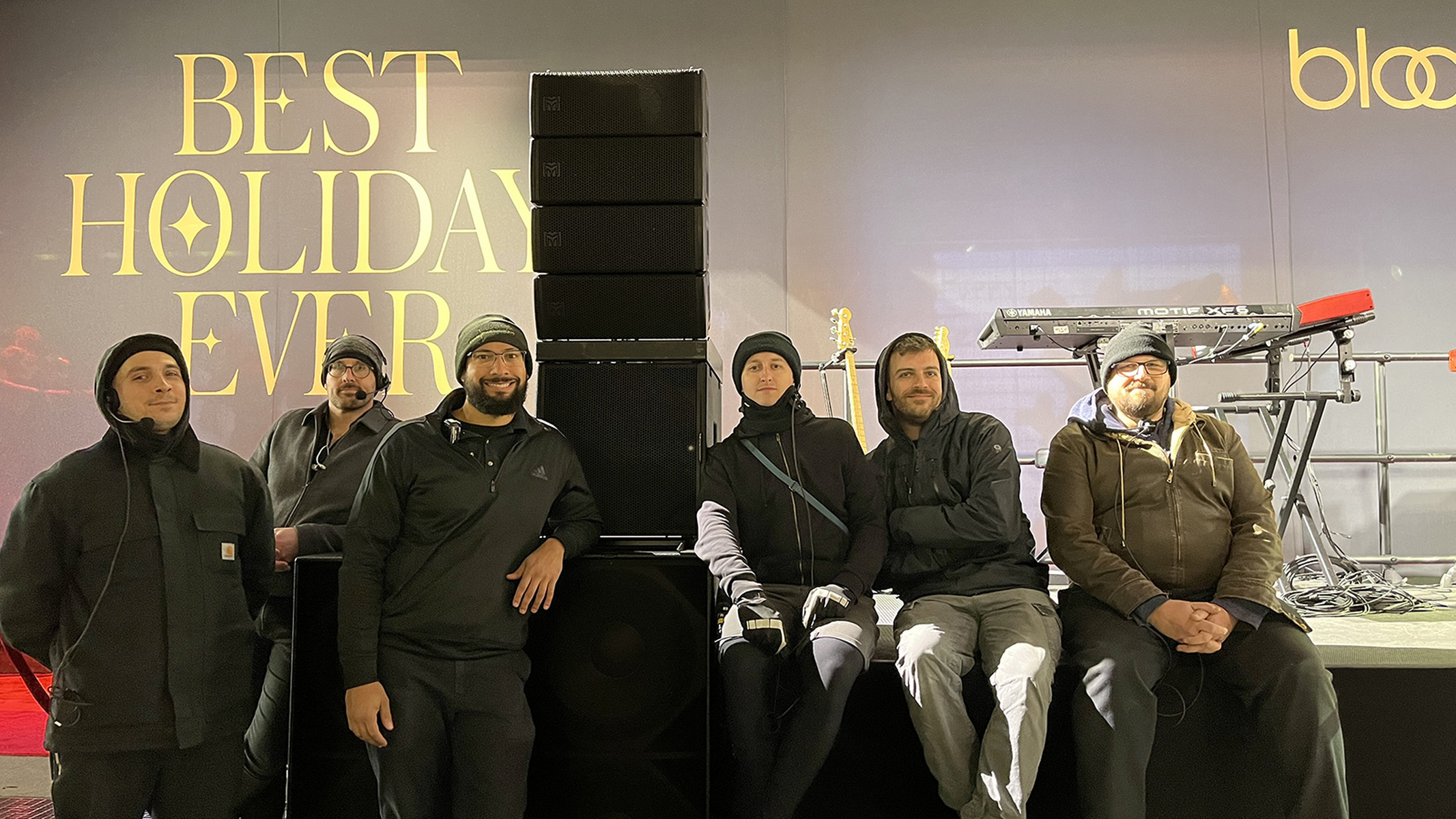 One of the highlights of New York’s holiday season is the unveiling of the seasonal windows at the City’s premier department store, Bloomingdale’s.

Providing the sound for the opening show which marks the occasion, and sees crowds thronging the streets on the corner of 59th Street andLexington Avenue in midtown Manhattan,is Frost Productions. The service company’s association with Bloomingdale’s extends back to 2013, but this year the store upped the ante, featuring Billy Porter and a full five-piece band, spread across a 32ft stage set in front of the feature windows.

Bloomingdale’s theme for its flagship store this year was ‘Best Holiday Ever’ and Frost Productions’ Audio Lead, Mike Alvarez, had no hesitation in specifying a Martin Audio MLA Mini in four hangs for the 20-minute show, knowing they could get the sound exactly where they wanted for the flamboyant stage performer and actor.

The low profile of MLA Mini enabled him to ground stack two MLA Mini rigs, underpinned with WS218X 2×18 subwoofers in the centre, without obscuring sightlines. At the same time, two outer hangs of four MLA Miniwere pole-mounted to an MSX 1×15 sub, while their much-deployed Martin Audio CDD-LIVE 8’s provided additional satellite fills and FOH near fields.

As back-up, the sound designer also provided three of his favoured Martin Audio XE300 wedges—two downstage centre for a stereo mix and one as a cue wedge for the monitor engineer. “The monitor wedges are among my favourites,” he said. “The fact the XE300 is coaxial is so great for pattern control, and with my choice of mics it delivered a lot of gain before feedback.”

“The coverage and response across the listening area was truly optimal”

The other benefit of using Martin Audio’s ground-breaking MLA technology was its unique controllability. Alvarez, who designed the system and also optimised the PA, turned immediately to the ‘Hard Avoid’ function. “This feature allowed me to provide coverage for guests across the street without having the PA hit the surrounding walls and windows of the buildings and cause slapback.

“The coverage and response across the listening area was truly optimal, without the annoyance of unwanted audio being where I didn’t want it: great results for our guests and the neighbours as well.

“You would never have known a concert was taking place a couple of blocks away, and a friend of mine—also a few blocks away—didn’t even realise there was a free show that evening! There were no complaints from NYPD and no stoppages for soundcheck during the day … just happy reactions from everyone who was able to check out the performance.” Foremost among these was a VIP area at the front.

There were no complaints from NYPD and no stoppages for soundcheck during the day … just happy reactions from everyone who was able to check out the performance.” Foremost among these was a VIP area at the front.

Mike Alvarez was also delighted that Porter’s production team had invested full confidence in Frost Productions, entrusting them with the choice of Martin Audio PA and DiGiCo consoles, as well as provision of all personnel. Working with the systems designer was FOH engineer Chris Lapke—stationed at the stage left control position—Carl Lund on monitors, Matthew Duane (PA tech) and Ethan Jose and Johnn Fedor (stage techs).

The fact that Frost Productions have been working with MLA Mini for the past six years made it a logical choice for this one, following in [Martin Audio Product Support Engineer] Joe Lima’s footsteps. “Joe was the first to use this technology at Bloomingdale’s, and ever since, we’ve been growing this system to incorporate more Martin Audio products every year. The XE300 was the missing puzzle piece this year,” continued Alvarez.

“For us Martin Audio isn’t just another brand,” he concluded. “There are gems in the entire catalogue—from the line arrays to the point sources, to the monitor wedges. As we are a niche company, specialising in events in places where there aren’t normally shows—such as zoos, museums, pop-ups etc—Martin Audio is perfect because it’s a lot about focusing the sound where I want it; having a compact speaker design is great for hitting the listening area without the fear of unwanted spill or reflections.

“I’m driving Martin Audio from a design perspective, and I’d prefer creating a better listening experience by focusing sound at the audience rather than throwing as far as I can.”