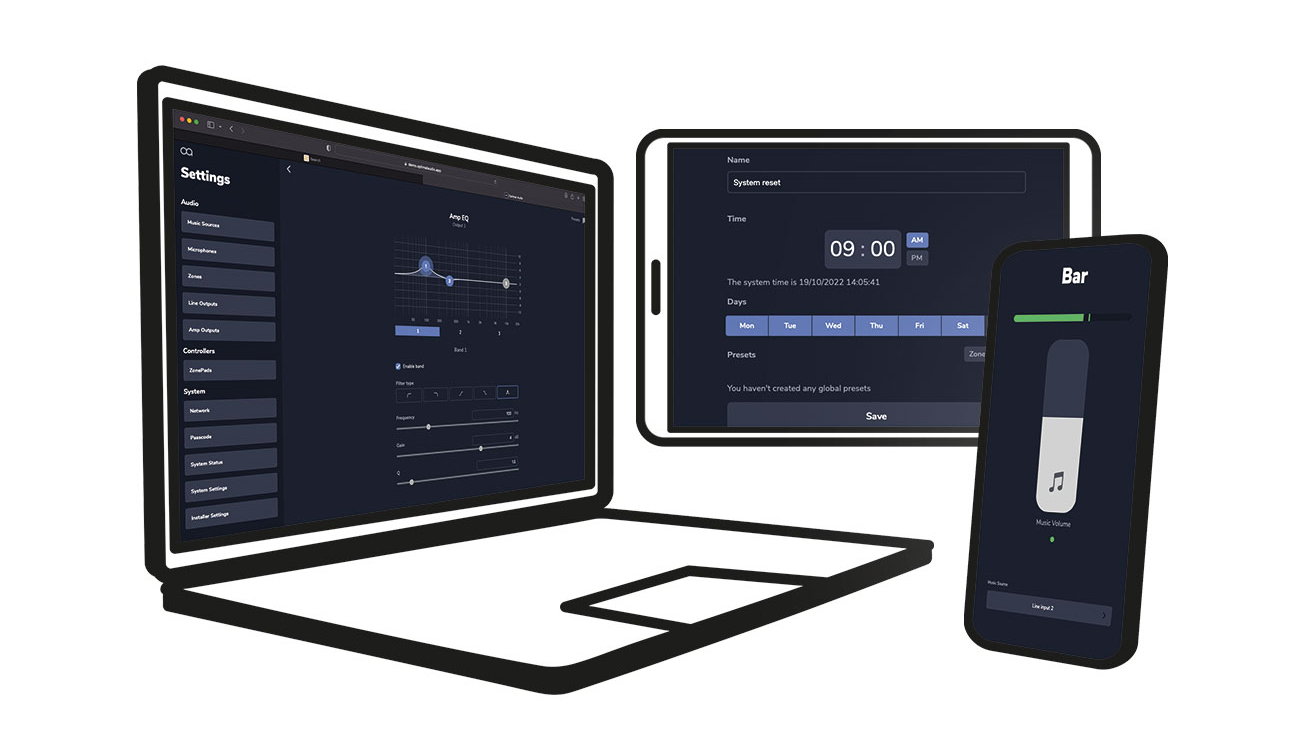 Optimal Audio has released the latest update to its WebApp and Zone firmware, furthering the flexibility and features that enable the simplicity of set up and operation of its commercial audio eco-system.

Zone is a series of zonal audio controllers with DSP and advanced configuration via WebApp. They are easy to install, intuitive to operate and comprise 4 or 8 zone powered and non-powered versions. WebApp brings the technology behind the Zone controller series to the end-user. Traditionally, the control and operation of commercial sound systems has been a complicated inconvenience to many users, who just want the system to work. WebApp puts all the functionality that an installer requires, as well as the ability to then present effortless and intuitive control, into the hands of the end-user.

With slick touchscreen-optimised controls, the WebApp is designed for ease of use on any device. The responsive and intuitive interface lays out the fundamental controls in a clean, accessible format with the deeper, lockable layers for system configuration available for integrators and system commissioners.

Complete system configuration can be achieved through the WebApp with ducking, EQs, limiters, advanced signal routing, programmable presets, timed events and much more. WebApp also allows for the system configuration files within Zone series products to be saved and easily replicated across multi-site installations.

Installers can now hide unused zones to create a cleaner interface, as well as having the ability within each zone settings page to hide sources from the selection list and the microphone volume controls. This ultimately can mean presenting the end-user with just the zone name and volume control – nothing could be simpler.

In addition to the existing 3-band EQ that works with the speaker tuning presets, an extra 3-band User EQ is now available to the installer on every output – all 8 line outputs and 8 amp outputs. Pairs of outputs now also independently support a bridge mode both for low impedance and for driving 70V high impedance speakers, and presets also now include Sub 10 and Sub 15 tunings.

For the installer, a clearer display for the fixed analogue EQ band has been added to all microphone EQs. To assist navigation and triggering of presets, the launch icon is now labelled. The preset list view can be re-ordered in Edit mode and helps to create a tidy list of the available presets. The installer page also has a new metering view which includes all the meters in the DSP for viewing system signal flow in one place.

Finally, Open Sound Control over Ethernet is the Zone control method from 3rd party controllers. In previous versions, only UDP message control of Routines was available but V1.0 adds support for UDP and TCP control of Zone parameters. Included in the release are a collection of example design files for TouchOSC to demonstrate use of OSC control. These give examples of every parameter, status and name to be the basis of control panels tailored to the specific application.

Summing up, Matt Rowe, Head of Engineering, commented:
“WebApp is our secret sauce to the success of Optimal Audio’s eco-system, and with this latest release we have extended the possibilities for the system integrator while improving the simplicity that can be presented to the end-user.”