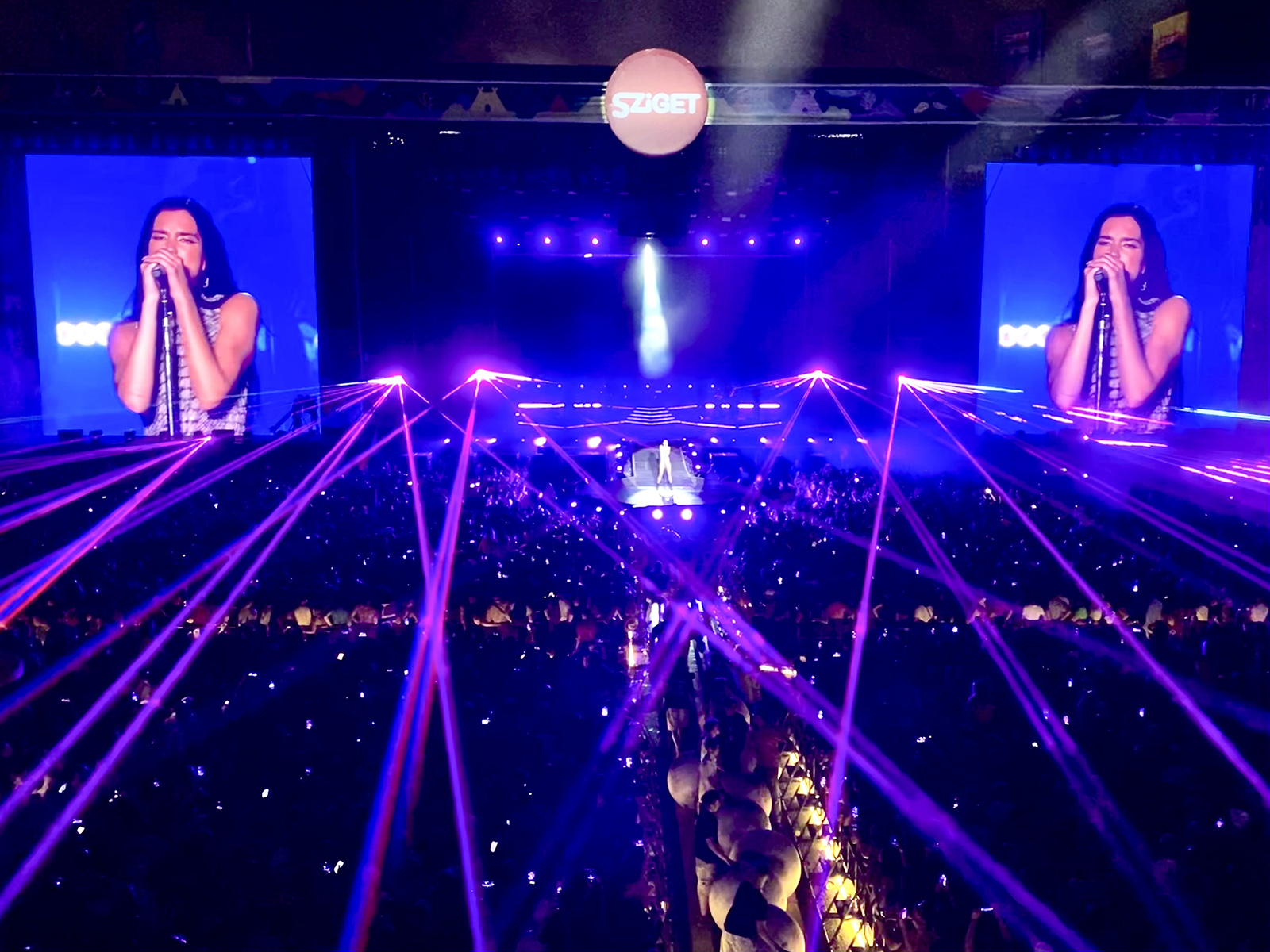 The long-standing relationship between Capital Sound (part of the Solotech UK Group) and the major week-long Hungarian Sziget Festival, resumed this year after the two-year hiatus.

This six-day event on the Danube—situated on the remote Hajógyári Island (Óbudai-sziget), north of Budapest—draws between 500,000-600,000 visitors, and always pulls a major list of global superstars across its stages. This year was no exception, with Dua Lipa, Arctic Monkeys, Stromae, Kings of Leon, Lewis Capaldi, Tame Impala, Nina Kravitz and Sam Fender among the many familiar faces.

As befits one of Europe’s largest musical and cultural festivals, the technical infrastructure was first class. This included Martin Audio’s multi award-winning MLA loudspeaker array, which has been a regular and reassuring sight for audiences and visiting sound crews alike on main stage since 2015.

They were fortunate to be able to benefit once again from the huge experience of Mezei, who has been involved with Sziget since 2001, initially starting on the smallest Pesti Est stage, before working up to main stage since 2004. And he ensured the partnership with Solotech once again produced a slick outcome.

The main PA comprised 17 MLA per side, with a single MLD Downfill at the base of each hang. Sidefills were an equally symmetrical 15 MLA (plus single MLD Downfill) on each flank—all underpinned by 42 MLX subwoofers (in 14 x 3-high cardioid stacks). Frontfills consisted of six MLA Compact (set on alternative sub stacks) and infill wing coverage was provided by 12 MLA Compact, set in 4 x 3 high stacks.

FOH delays comprised four further MLA Compact (left and right) while four additional delay positions were set further down the field, each populated by hangs of either eight or nine MLA (with an MLD Downfill in all cases), and a pair of MLX to handle the low frequencies. This provided an aggregated cabinet count of 182 units servicing main stage.

Ironically, while Solotech has now perfected the onsite design over the years—and getting inventory on and off the island is a well-drilled procedure—the challenges they faced were mostly logistical in a post-Brexit, post-Covid world, as Robin Conway explained.

“It was always going to be a challenge working in Europe post Brexit and the pandemic, with inflated costs of shipping, carnet etc,” he said. “However the production team were confident in our ability to deliver the festival audio and to deal with any additions. We have a great relationship and hope it will continue beyond 2022.”

MLA again found favour with many of the visiting sound engineers. According to Marci Mezei, many commented directly to him about the quality of the PA and the enjoyable experience it gave them—including Sigrid’s FOH sound man Jan Halsvik and Dua Lipa’s Will Nicholson, while techs from Tame Impala and Stromae voiced similar approval.

Of course Sziget is only one of three major Hungarian festivals serviced by Solotech and BG Event, with Volt and Balaton Festivals, managed by the same production team, taking place earlier in the summer. “The relationship works well and we’re able to limit our shipping to a single Artic trailer from the UK for these shows,” states Conway. “The system rolls from Volt to Balaton and then returns home before re-prep for Sziget later in the summer.”

Solotech personnel supporting Marci Mezei and his team included Mark Cleator (FOH and system) and Kevan Snuggs (monitors and stage). Meanwhile, Marci Mezei commended his own crew, consisting of BG Event’s Gabor Bacskay Mazsi, who looked after system and FOH duties, and Robert Szentesi and Aleksandar Aleksandrovic who were at the stage end.

For the Party Arena, where Steve Aoki was among a cast of headline DJs, they provided 18 W8L Longbow, in two hangs of nine enclosures, six W8LM, 30 SX218 subwoofers, 12 CDD-Live12 and eight WPS with iKon amps. Delay 1 featured a further 10 W8L Longbow and the second delay point was populated by 12 W8LC. Four XE500 featured among the DJ monitors.

Stated BG Event’s Szentiványi Balázs, “The Party Arena was once again a success this year and we received so much positive feedback. The old Longbow system was ideal for the electronic music genre, and the cabinets’ large format, and the additional speakers deployed, really did their job.”