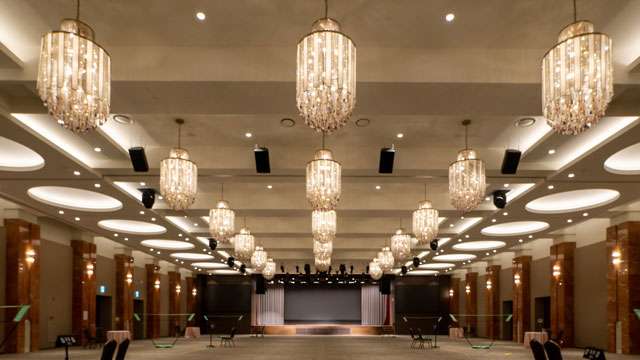 Martin Audio distributor Sama Sound has finished upgrading the first of several Resom Resort facilities that are under new ownership. Caroline Moss, from Pro AVL Asia, discovers how the best audio technology is contributing to the relaxation of clients and venue staff

Three years ago, South Korean construction company Hoban Co began proceedings to acquire Resom Resort from its creditors at a cost of US$224 million. Splas Resom, one of the company’s three resorts in Chungcheong Province, has just undergone refurbishment of its existing facilities and the construction of a new building, reopening as the country’s first membership spa resort.

Previously known as Resom Spa Castle, Splas Resom is located in Yesan, Chungcheongnam-do, an hour-and-a-half’s drive from Seoul and 30 minutes away from mountains, beaches and a variety of cultural tourist attractions. Splas Resom is supplied with waters from the Deoksan hot springs, revered by Koreans for 600 years for their healing properties.

Martin Audio’s Korean distributor, Sama Sound, partnered with dealer Asea Sound to submit a successful bid to supply sound systems for several multipurpose halls, including the main Juniper Hall, all of which host corporate events, seminars and workshops. The systems needed to be sufficiently versatile to handle a number of source feeds ranging from background music to voice announcements and occasionally, live music. Overseeing the project for Sama Sound was sales manager Jong Hwa Seo, while Seung Hwan Kim designed the system and Hong Geun Kim took charge of the speaker installations and system tuning.

Juniper Hall is mainly rented to third parties for a diverse programme of events, most of which include a speech component. This made speech intelligibility one of the first priorities when selecting an audio system for the hall. A cardioid subwoofer had also been specified in order to reduce leakage from behind the sub. Martin Audio’s Wavefront Precision Compact (WPC) proved to meet all the performance criteria. “The system pretty much decided itself,” explains Sama Sound product manager, Edan Kwon, “and since a cardioid subwoofer had been specified, we designed the system using Martin Audio’s SXC118 sub.”

The scalable Wavefront Precision offered additional advantages, too. “The venue was constructed without regard for architectural acoustics, so there were consequently many sound reflections, especially from the venue’s back wall, as well as from backstage,” continues Kwon. “The Hard Avoid feature in the proprietary Display software helped us to control those reflections, while the customer was more than satisfied at how the SXC118 cardioid subwoofer reduced the radiation behind.”

A main system of five WPC elements per side and a single W8VDQ Differential Dispersion central speaker, driven by iKON iK81 Dante eight-channel and four iK42 Dante four-channel amplifiers, has been installed in the Juniper Hall, accompanied by two-per-side SXC118 compact subs in cardioid mode, with a pair of LE200 wedges provided for stage monitoring. Four CDD12Bs function as delay speakers, with side fill handled by a CDD12B on each side of the hall.

In the smaller Rosemary Hall, a pair of Martin Audio W8VDQs and two SXC118 subs form the main system, with two CDD8Bs acting as delay speakers, all powered from a four-channel iK42 and an LEA Connect 702 amplifier.

The Geranium Hall has a pair of CDD8Bs as main speakers and a pair of CDD5Bs for delay, with four CDD8Bs in the Iris and Marigold halls, and a pair of the same speakers in each of the Sage Hall, Jasmine Hall and Verbena Hall spaces. All the CDD models are powered by LEA Professional’s Connect amp series, a relatively new brand which Splas Resom’s house engineer, Seung Hyuk Im, hadn’t worked with before. “I was surprised at the sound performance in conjunction with the CDDs; they are a really good combination,” he says. “Considering the performance and the IoT features they offer, they are very cost-effective products.”

All other equipment installed throughout the halls was well-known to the engineer. “Since the venue is mostly rented, I wanted to choose equipment that was familiar to visiting engineers,” continues Im. “Martin Audio was one of my considerations from the beginning, and it provided me with the best solution. I have experienced [the brand] both at exhibitions and also when I was working at a rental company. The sound is so clear and punchy, and the balance extremely good. Engineers who came in to rent systems for their events were all 100% satisfied.”

The optimisation and Hard Avoid features had worked really well, he adds. “I was also satisfied with the performance of the SXC118 cardioid subwoofer. Since we are a resort, the aesthetics were also important. Martin Audio speakers look classy and fabulous but are also small enough to be fairly unobtrusive – particularly the cardioid subwoofer; it is not easy to find one this small.”

Im is also unstinting in his praise for the CDD Series. “We are using many CDDs in our rooms for main speakers and also for delays,” he says. “In the Juniper Hall, they work as delay speakers, but also as the main speaker system when the hall is divided into several spaces. What makes them so special is that they sound exactly the same, no matter which size, from 5- to 15-inch models. It’s so easy for me to control the sound when there are different sizes of CDDs installed at the venue and, as well as the sound, I also love its small size and design.”

A top-of-the-range Allen & Heath dLive S7000 with DM64 mix rack was selected as front of house console in the Juniper Hall. “The dLive S7000 had enough input channels to handle all the equipment and devices in the room and it has an outstanding preamp,” says Im. “My most important consideration was stability. I’d never experienced any issues with the Allen & Heath SQ6 which we used before the S7000, so I am very satisfied with the stability of Allen & Heath consoles. I also like the fact that the interface is simple and intuitive, and it was very easy for me to learn how to use it. One click and you are there.”

Sama Sound also supplied Shure QLXD4 wireless mic systems to all the halls. “I am very satisfied with Shure QLXD; not just with the sound quality, but with the RF stability,” says Im. “I have many times suffered with RF disconnections with other wireless products, but I haven’t experienced any with QLXD over the course of a year. I tested them using all our 24 channels at the same time at the venue before installing them, and there was no problem at all.”

Im is confident that the new audio infrastructure will allow events to be staged smoothly using the resort’s own equipment, and that visiting rental companies can put on events without needing to bring in their own systems. “Thanks to Sama Sound, their proposal was just what I needed and our collaboration fulfilled all the requirements to achieve my plan,” he says.