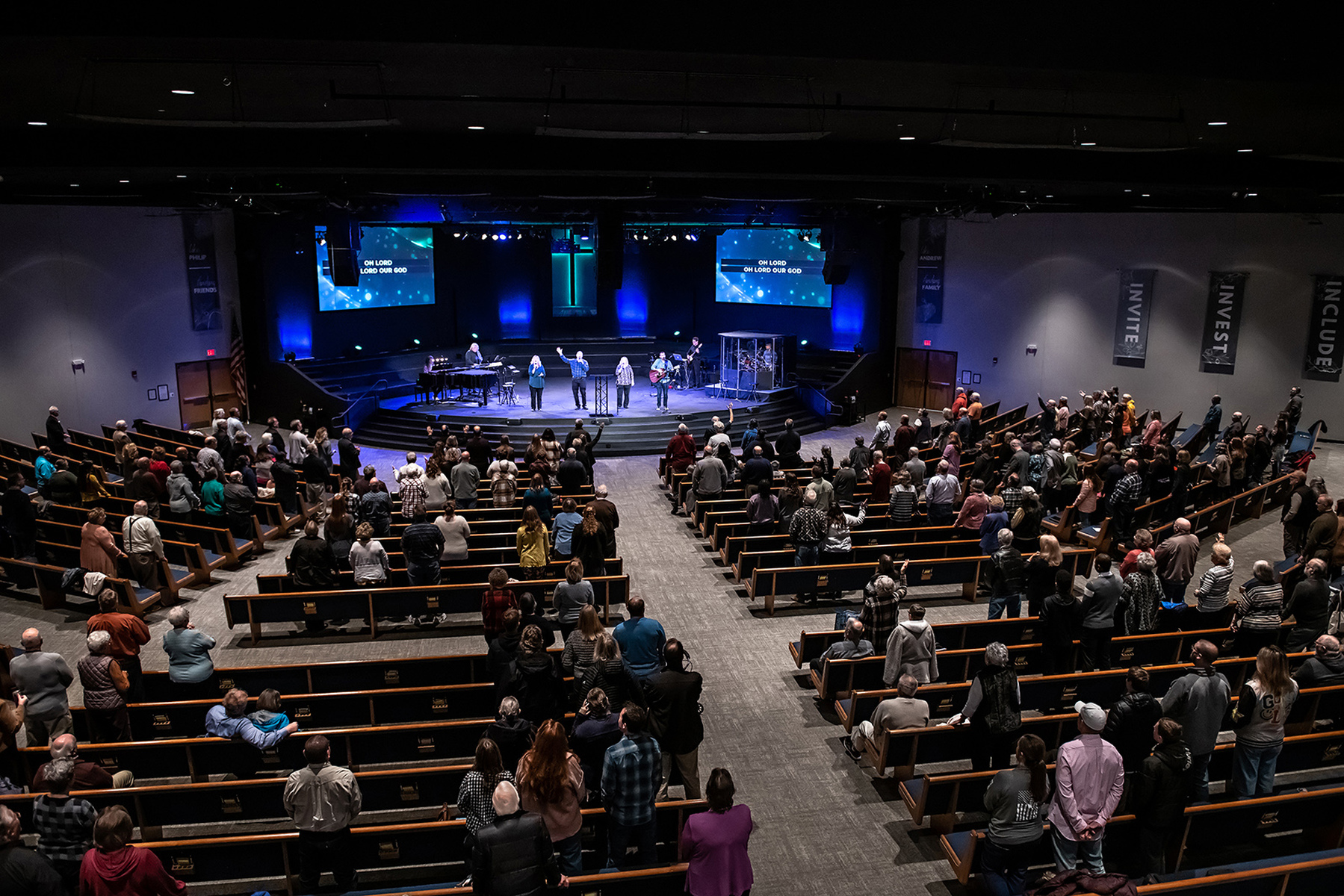 Based in Des Moines, Iowa, Conference Technologies Inc (CTI) recently completed a sound system integration at the nearby Grace Church—replacing the former PA, which had serviced their requirements for two decades, with the constant curvature technology of Martin Audio’s TORUS array.

This is the latest of a progressive series of AVL upgrades at the church undertaken by CTI over the past 10 years, and meets the high demands of a Southern Baptist church, whose lively worship ministry is based around bands, choirs and orchestras.

Led and overseen by worship pastor, Michael Hoskinson, the old PA, which had been in situ since the church opened, was providing inconsistent coverage across the 1200-seat fan-shaped auditorium and was clearly ready to be retired. “What we were looking for instead was a line array that would provide even coverage everywhere,” said the pastor. The previous system’s subs were also set upfront on the ground, and had been visually obtrusive. “And so we were looking for a system that would enable the subs to be flown, and at the same time provide better coverage.”

CTI’s VP Systems Integration, Tim Wright, who masterminded the integration, took over. “The frequency response from front to back and side to side was not good, and it had never been tuned to the room. As technology has advanced, and our needs have become more critical with regard to frequency response, so our expectations have changed.”

“Sonically I have always been impressed with the vocal quality of Martin Audio and TORUS”.

He made a wish list and discussed his requirements with Martin Audio North America. “We had a couple of runs with their design engineers and felt the coverage maps could still be improved. Then expectations leaned towards TORUS, and I knew that solution was spot on. I had heard the system at a trade show and knew exactly what it was capable of.

“Sonically I have always been impressed with the vocal quality of Martin Audio and TORUS is a level beyond that. I tested it with a CD and the clarity was fantastic; for the price point Martin Audio hits, this is second to none.”

Michael Hoskinson agrees. “From the other integrator options I was given we could have spent double the money for the same result.” In fact Wright himself had presented four different options, meeting different price points. “When I was asked which one I would recommend it was a no brainer,” he said. And having seen some sample videos of TORUS online Michael Hoskinson wasted no time in rubber stamping the decision. 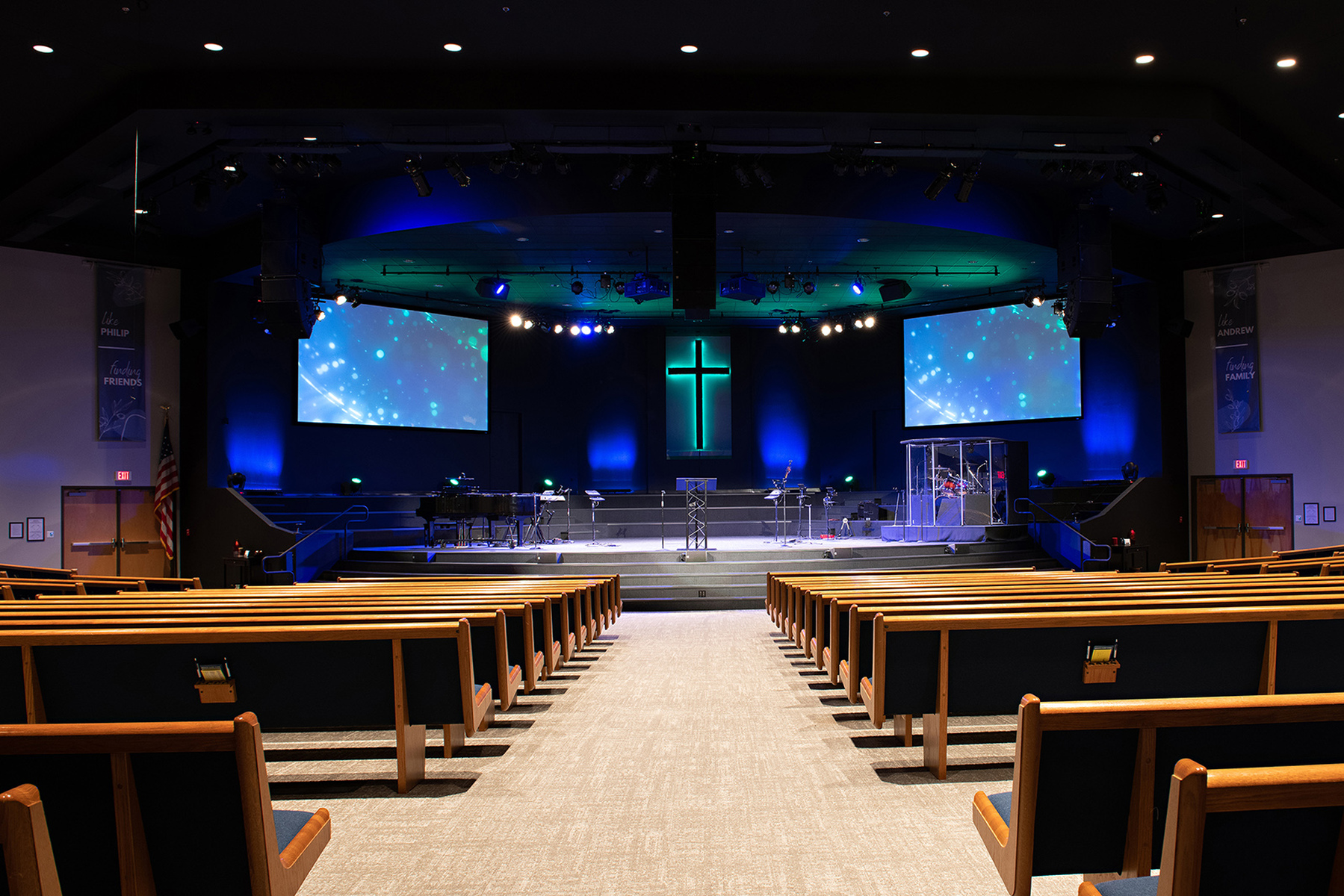 So what makes TORUS so ideal for a flared space such as this? The constant curvature array is designed for applications that typically require an optimum throw between 15-30 metres, and where a full-blown line array or point source solution may not be appropriate. The T1230 offers a vertical pattern of 30° while T1215 offers 15° but both then have a flexible horizontal pattern that can be manually adjusted between 90°, 60° or 75° (asymmetrically).”

Although Tim Wright has long been a fan of Martin Audio, he admits that CTI have only become recent converts to Martin Audio. “Although I have installed the brand previously this was the first big chance to do something of this calibre and size.”

However, the Grace Church fit-out was not without its installation challenges included locating the three hang points, with a confined workspace above a hard-deck ceiling. But an L/C/R system was duly implemented, with a combination of two TORUS T1215 with a T1230 underneath, backed by a pair of SXCF118 18in cardioid subs, on each hang, driven by four iKON iK42 4 x 2500W Dante-supporting process-controlled amplifiers. A further pair of Martin Audio’s high-powered XD12 12in point source speakers were deployed as corner fills and seven of the ultra-compact DD6 6.5in speakers placed around the perimeter of the stage for close front fills. “It was having fill speakers around the lip that the old system really lacked,” believes Tim Wright.

In addition to providing exemplary coverage, the new fit-out also meets the aesthetic requirement, since the ceiling is now painted black, and the speakers blend in seamlessly. Michael Hoskinson is also delighted to have the subs up in the air, noting that while the trim height of the hang is now lower than previously it does not intrude on the two-screen projection set up. “The whole thing looks really sleek now,” he says.

When Martin Audio’s Will Harris came to commission it, “as soon as it was physically turned on it sounded great,” according to Wright. “It soundedexactly like it looked on the engineering document. Any DSP that was needed was built into the amps. [iKON] is a complete process-controlled amp for a good reason because it is designed to work together [with TORUS].”

And Michael Hoskinson shares his enthusiasm, particularly since congregants are reporting widespread satisfaction and enjoyment of the new array. And with the fast turn-around of activity within the church he knows that in the coming months they will be throwing a lot at TORUS. “These speakers can expect to be getting pumped harder than they would normally expect,” he exclaims.